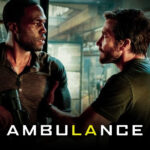 Caution: Entering Spoiler Territory! Grab your popcorn and vomit bags as Creative Genius Bryan Caron and Professor Avatar Tom Grimes discuss Michael Bay’s new action thriller, Ambulance, based on the 2005 Danish film of the same name. The guys then discuss new episodes of Young Rock and Moon Knight, Season 3 of Servant, and go over the latest news in television and film. So what say you? Was Ambulance the thrill-a-minute ride you were hoping for, or was it more noise than substance?