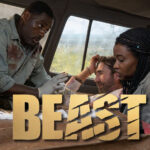 Caution: Entering Spoiler Territory! Head out to the African jungles to hunt a Beast with Creative Genius Bryan Caron and Professor Avatar Tom Grimes as they discuss Idris Elba’s new horror suspense thriller. Afterward, stick around for their thoughts on new episodes of Only Murders In the Building, Animal Kingdom, and Resident Alien, the premiere of She-Hulk: Attorney at Law, and some hints at things to come. So what say you? Were you enthralled by the vengeful Beast, or did the film lack enough meat for a satisfying meal?