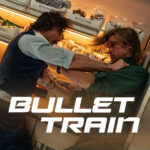 Caution: Entering Spoiler Territory! Take a ride on the Bullet Train as Creative Genius Bryan Caron and Professor Avatar Tom Grimes discuss the Brad Pitt-led action thriller comedy. After, check out their thoughts on the season (series?) finale of The Orville: New Horizons, new episodes of Animal Kingdom and Only Murders in the Building, and a lot of news on a variety of different television shows and movies. So what say you? Did Bullet Train satisfy your thirst for comedic action or was it a little too mind-numbingly chaotic for its own good?