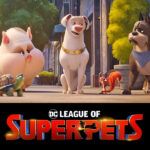 Caution: Entering Spoiler Territory! Check your animals for orange kryptonite as Creative Genius Bryan Caron and Professor Avatar Tom Grimes discuss DC’s new animated entry, DC League of Super-Pets. Stick around for discussions on new episodes of Animal Kingdom, The Orville: New Horizons, Only Murders In the Building, Jurassic World Camp Crustaceous, and a look ahead at Marvel’s upcoming slate of films that compile phases 5 and 6 of the MCU. So what say you? Was DC League of Super-Pets a high-flying adventure, or did if feel it stole from too many other (better) films? And who wants to see more of Keanu Reeves as Batman?