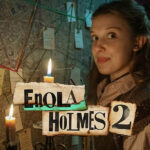 Caution: Entering Spoiler Territory! Feeling alonE? That’s okay because Creative Genius Bryan Caron and Professor Avatar Tom Grimes are here to review Enola Holmes 2, the lively sequel to the 2020 Netflix family film. And that’s not all! After, the boys jump into television with their thoughts on new episodes of Quantum Leap, The Winchesters, Andor, Ghosts, Young Rock, and Young Sheldon, as well as the announcement of a Friday the 13th prequel show coming soon to a Peacock near you. So what say you? Did Enola Holmes discover a better (true life) mystery to solve, or did the sequel just feel too run-of-the-mill for your liking?