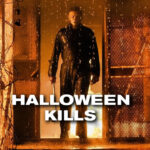 Caution: Entering Spoiler Territory! Get into the Halloween spirit with Creative Genius Bryan Caron and Professor Avatar Tom Grimes as they review the sequel to the direct sequel of the original Halloween film, Halloween Kills. Then, listen for quick reviews on several other recent films, The Many Saints of Newark, Gunpowder Milkshake and The Guilty. So what say you? Did Halloween Kills do a good job of setting up the final chapter in the new trilogy, or did it stab itself in the foot with too many clichés?