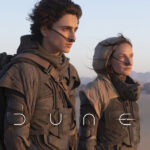 Caution: Entering Spoiler Territory. Time is limited this week for Creative Genius Bryan Caron and Professor Avatar Tom Grimes, but they still had time to watch part one of Denis Villaneuve’s sprawling epic, Dune. The boys also take a quick look at the 1st season finale of Hulu’s Only Murders in the Building and their predictions for where the show may go in season two. So what say you? Did Dune blow your mind with its tremendous special effects or was it far too political to get invested in?