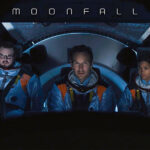 Caution: Entering Spoiler Territory! Get your conspiracy hat ready as Creative Genius Bryan Caron and Professor Avatar Tom Grimes journey to the moon with Moonfall, Roland Emerich’s newest disaster sci-fi action film. After, enjoy discussions on new episodes of The Book of Boba Fett and Resident Alien, a look back at Servant, a look ahead at Marry Me, and some news on upcoming pilot episodes and renewals. So what say you? Was Moonfall an awesome study in conspiracies or did the script hinder the film from becoming great B-movie schlock?