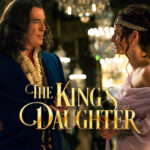 Caution: Entering Spoiler Territory! Swim to Atlantis (or not) with Creative Genius Bryan Caron and Professor Avatar Tom Grimes as they discuss The King’s Daughter, a new mermaid fantasy starring Pierce Brosnan and Kaya Scodelario originally filmed back in 2014. They also discuss the cancellation of Bull, the announcement of Justified: City Primeval, new episodes of The Book of Boba Fett and The Wheel of Time, a look ahead at the reboot of Fraggle Rock: Back to the Rock, and a couple of quick thoughts on the legacies of Meat Loaf, Louie Anderson and 60’s musical icon Ronnie Spector. So what say you? Did The King’s Daughter bring the right level of magic or did the film miss the mark on bringing the right level of fantasy to the screen?