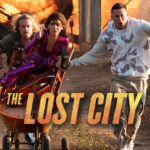 Caution: Entering Spoiler Territory! If Raiders of the Lost Ark and Romancing the Stone had a baby it would be The Lost City, the new action adventure starring Sandra Bullock and Channing Tatum. After Creative Genius Bryan Caron and Professor Avatar Tom Grimes discuss that fun, mindless getaway, they celebrate the worst movies of the year with a discussion on the Razzie Awards (aka the anti-Oscar awards), their Oscar predictions for the top categories, and finally, some television and streaming news. So, what say you? Did The Lost City laugh its way into your heart or did it steal too many elements from far better films?