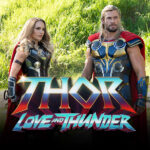 Caution: Entering Spoiler Territory! Join Creative Genius Bryan Caron and Professor Avatar Tom Grimes as they take the bifröst into the shadow realm with Thor: Love and Thunder, a first in the MCU, as it’s the fourth installment in an individual character’s filmography. Stick around after for reviews of the new Mel Gibson action-thriller, Hot Seat, the revival of Beavis and Butthead in Beavis and Butthead Do the Universe, new episodes of Stranger Things Season 4 Part 2, The Orville: New Horizons, and Ms. Marvel, Tom’s list of the top 5 movies of the year so far, and a quick farewell to a couple of great actor, Gregory Itzin and James Caan. So what say you? Did Thor: Love and Thunder live up to the Thor’s namesake, or did it devolve into a childlike mess of cartoon madness?